Several of our close friends are just starting the ‘having kids’ phase. Many of my current or previous colleagues have kids aged ten to eighteen. Then there are a few of us who haven’t quite started the kids phase. One of my former F1-flavoured colleagues has just bought a very brightly coloured M3. He also has kids in the upper range – does that mean it’s a mid-life crisis? Another pal just bought a KTM motorbike. He is older than me, but hasn’t currently got kids so maybe he is just living the dream? Two other pre-kids friends have just bought bikes. One an R6, the other a Harley. The bikes definitely suit their respective characters. If told that these two had made these purchases, but asked to guess who chose which, it would be easy. Now that we are no longer under twenty-four, it turns out that we can ride a proper bike with an engine bigger than in most hatchbacks immediately upon passing the test. Now that’s compelling!

At this point, I must hold my hands up and say that I know very little about bikes. Okay, I know my V-twin from my in-line four and I can see the difference between belt, chain and shaft drives. I even know a little when comparing 2 stroke with 4 stroke, but that is about it. Having spent my first day on a bike during a recent stag do and learning to powerslide this Yamaha in the gravel within an hour or so, the whole ‘bike’ thing lodged in the back of my mind a little while ago. A motocrosser has all the good bits of cycling on trails, but with an engine. No pedalling and rear-wheel drive! What’s not to like?

Even though I’ve always vowed not to ride a bike, after seeing the third friend’s bike I wanted to play. However, on the public road, the risk just seems too great in busy traffic. Particularly considering what I do for a job and the fact I like going a little more sideways than forwards. That day on the Yamaha was very similar to playing with a Caterham. The only difference was moving my body weight and sticking a leg out! But sideways on low grip surfaces is fairly easy. The real challenge would be learning to do the same on a superbike on a tarmac surface.

On the road, there’s the risk in traffic, getting wet when it rains, not to mention ‘helmet hair’. Why would anyone ride a bike away from woodland trails, race circuits or sun-drenched American freeways? Surely it is something to do with recapturing the element of youth! But then, in fact, it turns out that bikes are cheap. And the Harley should hold its value. Oh, and the running costs are a fair bit less than my sportscar. Maybe they aren’t as daft as I thought?

Intriguing dynamics, that exposed, yet exhilarating feeling and the power-to-weight ratio. All without costing an arm and a leg. To be honest, whether a chance to escape the developed later phases of family life, or just feeling young, free and living the dream, maybe a proper bike is the answer? 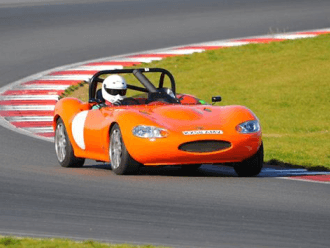